During the ongoing COVID-19 crisis, Town Hall is open to the public Mondays through Thursdays

Town Hall staff are still available by phone and email Mondays through Fridays 9am to 3pm.

Create an Account - Increase your productivity, customize your experience, and engage in information you care about.

The Greenough Land - at 242 acres - is the largest conservation parcel owned by the Town of Carlisle. Purchased in 1973 from the estate of Henry Vose Greenough, it contains a wonderful combination of upland and wetland woods, a large pond and wetlands (part of the Page’s Brook watershed), agricultural fields, and a barn. Native Americans certainly used this land first. European settlers came to this property in 1757 and started a long history of agricultural use of the land. The flat fertile meadows on the property were once a training ground for the Revolutionary soldiers. In addition, there was a water-powered mill (on Page’s Brook) and, later, a windmill on the property. The Greenough estate lands (totaling 280 acres in 1972) were acquired by Henry and his wife, Emery, in the late 1920s and early 1930s. At present, while a small portion of the land is still used for agriculture, much has reverted to forests - including a pine plantation - and all of the original farm buildings except the barn are gone. 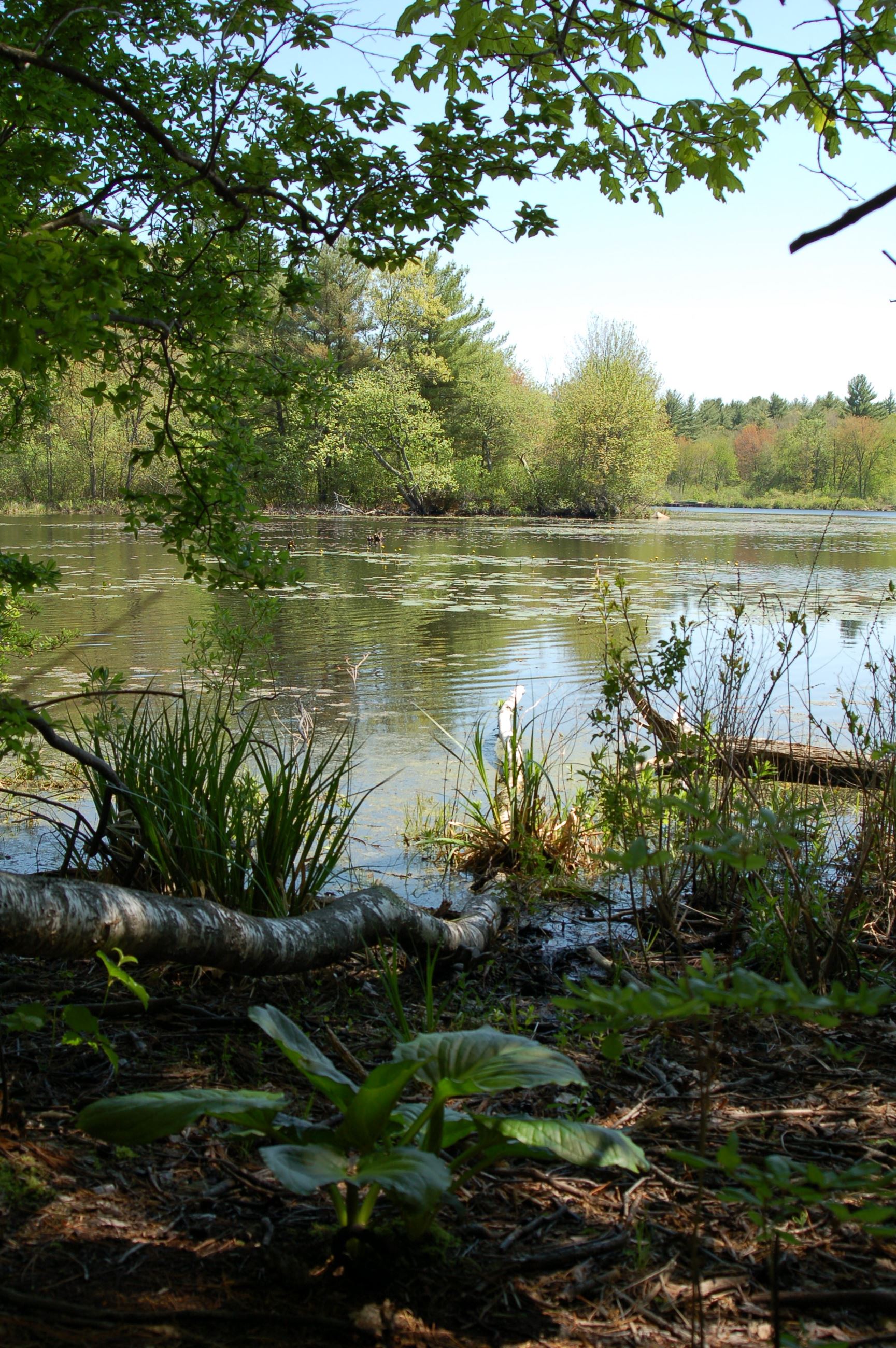 The Greenough Land, when combined with abutting and linked (nearby) conservation lands, forms an impressive 742-acre conservation area. (The major abutting conservation land is the 321-acre Great Meadows National Wildlife Refuge.) On the Greenough Land itself, there is a great diversity of ecosystem or habitat types including wooded uplands with interesting rock outcrops, wooded wetlands, a stream (Page’s Brook) and associated wetlands, Carlisle’s largest pond (Greenough Pond), a red pine plantation, and agricultural fields used primarily for growing animal feed (hay and corn). The property also has about 1,800 feet of frontage on the Concord River (but with poor access), and a number of vernal pools, three of which have been certified by the State. The Massachusetts Division of Fisheries and Wildlife maintains about 30 Wood Duck nesting boxes in the Pond and upstream wetlands. Just downstream of the Pond is a colony of a State-listed rare plant, Britton’s Violet. One or two mature (or nearly mature) American Chestnuts may be found on site.

Buildings - At the time of purchase, the Greenough land had not only the above-mentioned barn, but also a caretaker’s cottage, greenhouse, piggery, hen and turkey houses, corncrib and tool shed. The cottage - occupied until 1997 by Alfred and Elizabeth Windhol (Henry Greenough’s caretakers) - and greenhouse were demolished in 2007. The remaining buildings, except the barn (which is not currently used), fell of their own accord.

Greenough Pond - The earthen dam across Page’s Brook, forming Greenough Pond, was apparently installed by Henry Greenough (before 1930) to attract water fowl. As mentioned above, several Wood Duck nesting boxes have been placed in the Pond, and nesting activity is monitored by the State. While large (about 21 acres), Greenough Pond is fairly shallow, averaging only 2.1 feet deep. The Conservation Commission’s Rules and Regulations specifically allow fishing, ice fishing, canoeing and skating on the Pond; however the lack of vehicular access has limited such uses.

Skating Hut - Beside the wetlands on the west side of Maple Street, there is a skating hut built in 1974.

There is a great diversity of trails on the Greenough Land. Walking a loop around the property (unfortunately requiring a segment on Maple Street) can give a hiker a good hour’s walk with forest, water and field vistas. A much more challenging loop walk can be made by connecting to the abutting Great Meadows National Wildlife Refuge (GMNWR), and thence to Carlisle’s Foss Farm. The return hike can be made on a different trail in the GMNWR when water levels are low. See below for trail access.